Lag ny Keeilley lies on the west facing sides of Cronk ny Irree Laa at OS Grid SC21677454, Lat/Long N54.135642 W4.730927. It is set on a ledge forming a small natural platform near the foot of a lag or hollow and access is by the old pack-horse road through Eary Cushlin. This roadway in itself is of great interest as the best existing survival of the pack-horse ways in the Isle of Man before the modern system of highroads.

The site plan shows the Keeill, Cemetery, Culdee’s Cell, and the Enclosure. The Enclosure with a westerly aspect, forms an oval, about 27 yards east and west, by 33 yards north and south. the keeill being towards the north-east. It is artificially levelled at a cost of great labour by excavating towards the east and filling in towards the west, and was carefully drained with large stones.

On the east side the high ground had been cut into, and a bank about 14 ft. wide, left by the approach way made at the back of it (east), which is four to five yards wide ; from this high ground an artificial embankment has been carried about two-thirds of the distance round the northern end, and a quarter of the way round the southern, the west has been filled in by all this excavated soil and rubble and carefully built up, particularly at the south-west, with great blocks of stone from the face of the cliff. The entrance on the south-east is marked by a large upright stone, 4 ft. 4in above the ground by 2 ft. 5 in. at the base, and 7 in. thick.

The inner face of the wall at the east end of the keeill was found to have fallen in, but when the loose stones were cleared, the two lower courses as well as the outside of the wall (for a height of over two feet) remained in position ; it was therefore refaced with the stones which had fallen, the other walls being cleared, but otherwise left exactly as they were found. Beneath these fallen stones was discovered the base of the altar. The keeill measures 13 ft. by about 8 to 8ft. 6in. At a point aft. 6in. from the west end both walls incline inwards, narrowing the space between them to 8ft. 2in., but this may perhaps be due to settlement, a projecting stone here in the south wall, making allowance for bulging, appears to be intentional, forming a sort of bracket. The doorway is in the middle of the west wall ; on each side of it the inner stone, about 2 ft. high from the floor, stands on edge, the others being laid horizontally ; there is a slight inclination and a splay outwards from 21 in. to 24 in, For the first time an indication was found of the door itself in the form of a socket-stone (that at Ballachrink had not then come to light), which was in position just inside the doorway on its southern side.

There were lintel graves along the north wall of the keeill, on the outside, and at the east end. Several rounded quartz pebbles at the foot of the east bank also may have been placed there in connection with a burial ; a grave was found in examining what appeared to be a drain at the junction of the small outer platform with the inner one, and one or two more north of the keeill. This cross slab was found during excavation at Lag ny Keeilley by the Manx Archaeological Survey in 1909. It has a simple cross on each face. One side is more weathered than the other, and may once have borne an equal limbed cross, while the other has a ‘latin’ cross, with the lower arm longer than the others. 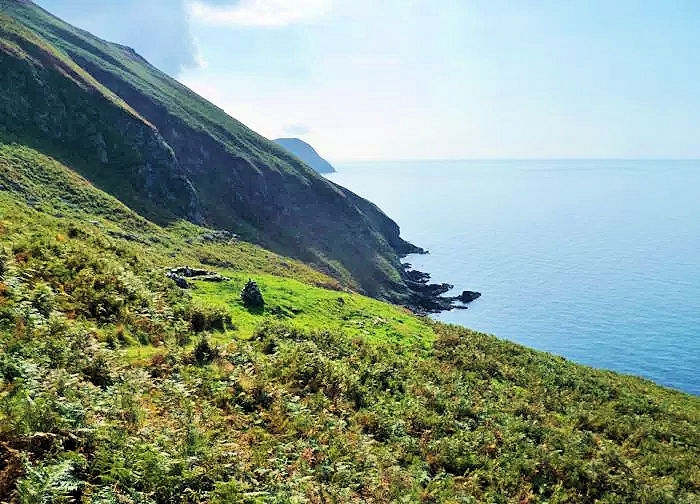 The approach to Lag ny Keeilley 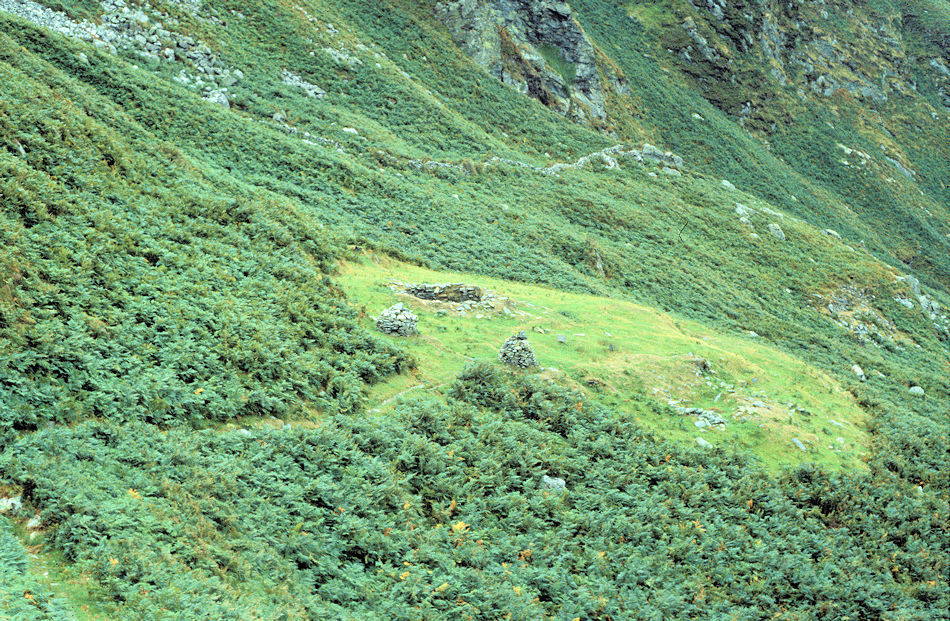 The site of Lag ny Keeilley 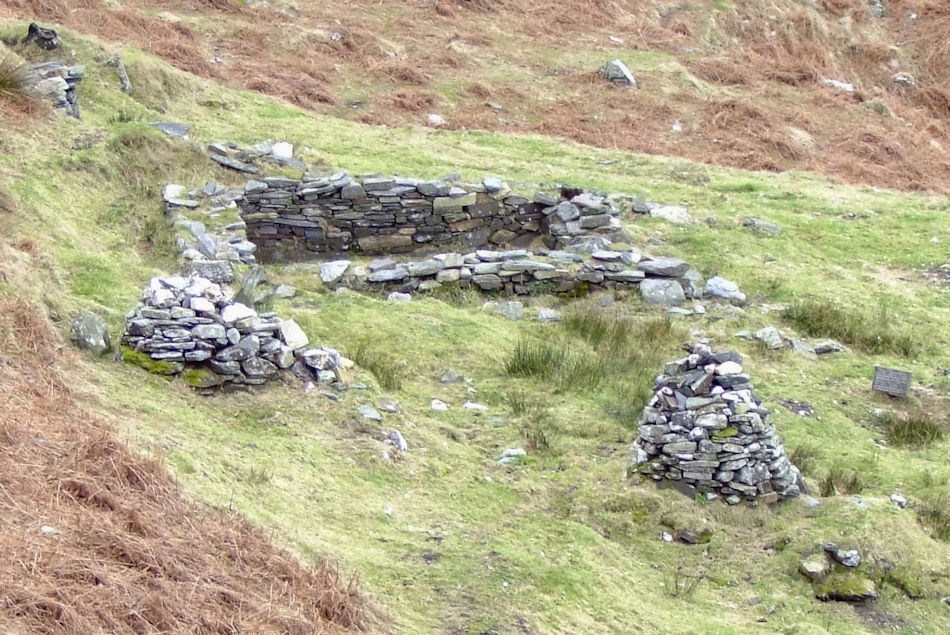 The remains of the church at Lag ny Keeilley

(all photos by David Beard)

This information is taken from the report of the archaeological survey undertaken by the Isle of Man Natural History and Antiquarian Society, 1908.