Constantinople: A Period of Iconoclasm

In the 540’s an outbreak of plague decimated the population of Byzantium. The empire entered a period of territorial decline as Slavs overran the Balkans, Lombards captured Italy and Persians invaded from the east. The expansion of Islam resulted in Egypt, Syria and the Holy Land being cut off from Byzantine influence.

Initially, these crises resulted in a growing popularity of devotional icons, especially ‘miraculous icons’ – those that were believed not to have been made by human hands. Coins were issued bearing the face of Christ.

This was stopped in 730 when Leo III banned the use of images showing Christ, Mary, or the saints. Many images were whitewashed or defaced. The period of Iconoclasm lasted until 843, although there was an intermission from 787 to 814.

Historians have suggested a number of reasons for this period of iconoclasm. Some believe it was the result of a political reaction to the increasing power of the church, while others claim it was a religious reaction to the superstitious faith in icons.

The failure of iconoclasm and the Triumph of Orthodoxy resulted in an explosion of religious art. Orthodoxy was once again closely linked with the idea of devotional icons. Works such as the Khludov Psalter equated iconoclasm with the killing of Christ. 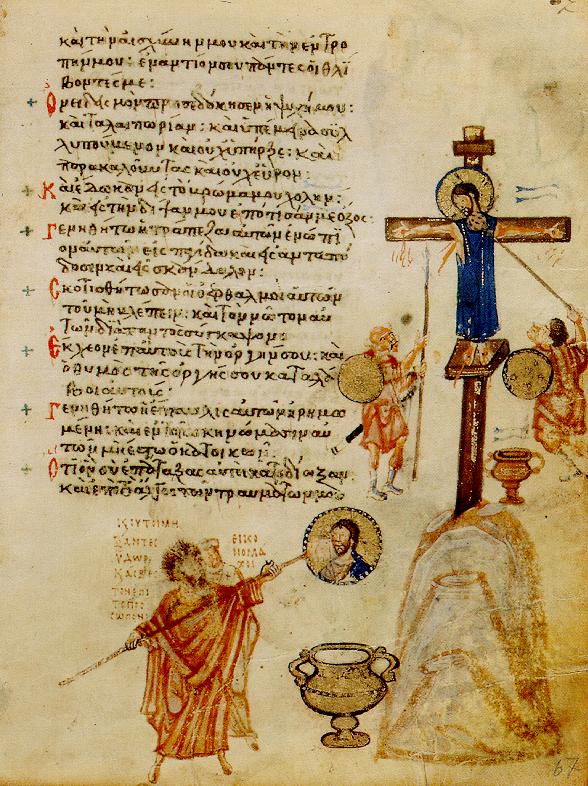 Miniature from the 9th-century Chludov Psalter with scene of iconoclasm. Iconoclasts John Grammaticus and Anthony I of Constantinople. (Wikimedia)