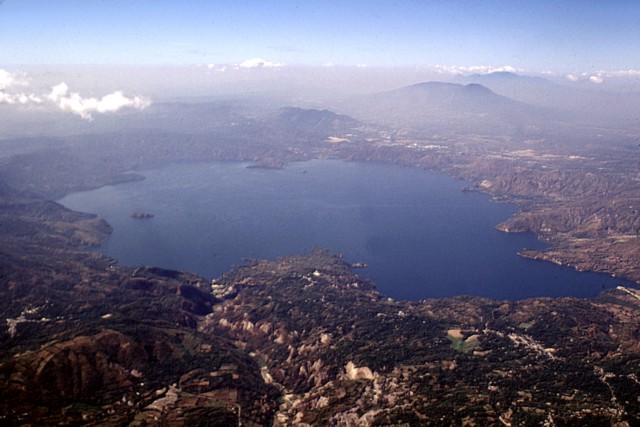 The Volcanic Eruptions of Ilopango and El Chichon

A multidisciplinary study published by Matthew Toohey et al1 has shown the climatic effects of two major volcanic eruptions in the middle of the sixth century. The eruption of Ilopango in 536 AD was followed by the eruption of El Chichon in 540.

At a meeting of the European Geosciences Union Toohey said: “Either would have led to significant cooling of Earth’s surface, but taken together, the two eruptions were likely the most powerful volcanic event affecting the northern hemisphere climate over at least the past 1,500 years.”2

The result of these eruptions would be a blanket of sulphur particles in the stratosphere which would lower the temperature by two degrees Celsius which would have a drastic effect on agriculture causing famine throughout much of Europe.
Just one year after the eruption of El Chichon, outlying parts of the Byzantine empire were subject to an outbreak of Yersinia pestis (the bacterium which caused bubonic plague during the Black Death) which reached the capital, Constantinople, in 542 and spread throughout Europe. (See The Plague of Justinian for further information.) It is not known whether the effects of the volcanic eruptions played a role in this outbreak of plague. Toohey suggests that the twin blasts marked the pivot between the waning years of Antiquity and the prolonged period of social decline and turmoil known as the ‘Dark Ages’. 3

Procopius writing in 536 AD 4 states “during this year a most dread portent took place. For the sun gave forth its light without brightness … and it seemed exceedingly like the sun in eclipse, for the beams it shed were not clear”

The Annals of Ulster: Describes “A failure of bread in the year 536 AD”

The Annals of Inisfallen: Describes “A failure of bread from the years 536–539 AD”

The Evidence from the Ice

The analysis of a 72 metre ice from the Colle Gnifetti Historical Ice Core Project has provided extremely detailed information of climate changes over several thousand years.

”The primary aim of the Colle Gnifetti Historical Ice Core Project is to study the intricate relationship between humans and the climate by tracking past events. Ice cores detailing a long history have previously been taken from polar regions, but Colle Gnifetti offers glimpses into Europe’s past that others cannot.”5

Normally, ice core researchers are able to resolve 100 samples per meter of the core sample. However, the team use a new non-destructive technique called laser ablation inductively coupled plasma-MS (LA-ICP-MS) which allowed much greater precision.

LA-ICP-MS permits up to 20,000 samples per metre to be taken. Research team member Paul Mayewski commented: “The first day using LA-ICP-MS, we took more measurements than I had collected in my entire career, we went from collecting hundreds or thousands of measurements to millions.” 6

The Evidence from Dendrochronology

The effects of volcanic activity in 536 and the dendrochronological evidence for this was discussed in 1994 by Mike Bailey of Queens University, Belfast 7.

In the abstract to this article Bailey writes:

“The tree-ring evidence, particularly that from European oaks (Quercus), shows a two-stage response which raises questions about whether only a single massive eruption was involved.”

Using new tree-ring measurements from the Altai mountains in Russia, a team lead by dendroclimatologist Ulf Büntgen has been able to precisely reconstruct the summer temperatures in central Asia for the past 2,000 years.8

These results compare well with dendrochronological data from the European Alps that Büntgen published in 2011. Taken together, the data from the Altai mountains and the Alps allow reconstruction of the summer temperatures for large parts of Eurasia over the last 2,000 years. The data reveals a dramatic drop in temperature in the sixth century AD. This event shows even lower temperature and longer duration than the ‘Little Ice Age’.

The researchers refer to the period from 536 to around 660 CE for the first time as the “Late Antique Little Ice Age” (LALIA). According to the team: “ this period bore witness to a whole series of social upheavals. After famine, the Justinian plague established itself between 541 and 543 CE, killing millions of people in the centuries that followed and possibly contributing to the decline of the Eastern Roman Empire.”

The Effects in Early Medieval Europe and Scandinavia

“The impact was not unlike that of a nuclear winter. Trees began to wither, their growth stunted, as seen in the dendrochronological record. Unseasonable cold gripped the northern hemisphere with snow in the summer months visible in the Norwegian high-altitude data. The weakened sunlight most directly affected plant life of all kinds, including crops, quite literally taking out the food supply. Written sources from China and India describe harvest problems and disrupted weather patterns; the environmental evidence is consistent from North America to mainland Europe. In the Mediterranean world, writers among the Goths and other militerised imperial successors described the famine, riots, and slide into civil unrest that resulted from the failed harvests in the endless winter.

But in Scandinavia, the ecological consequences were far worse. There, the natural environmental conditions meant its people already existed at the limits of resilience; at the best of times, their agricultural production was acutely vulnerable to fluctuations in temperature and other climatic shifts.” 9 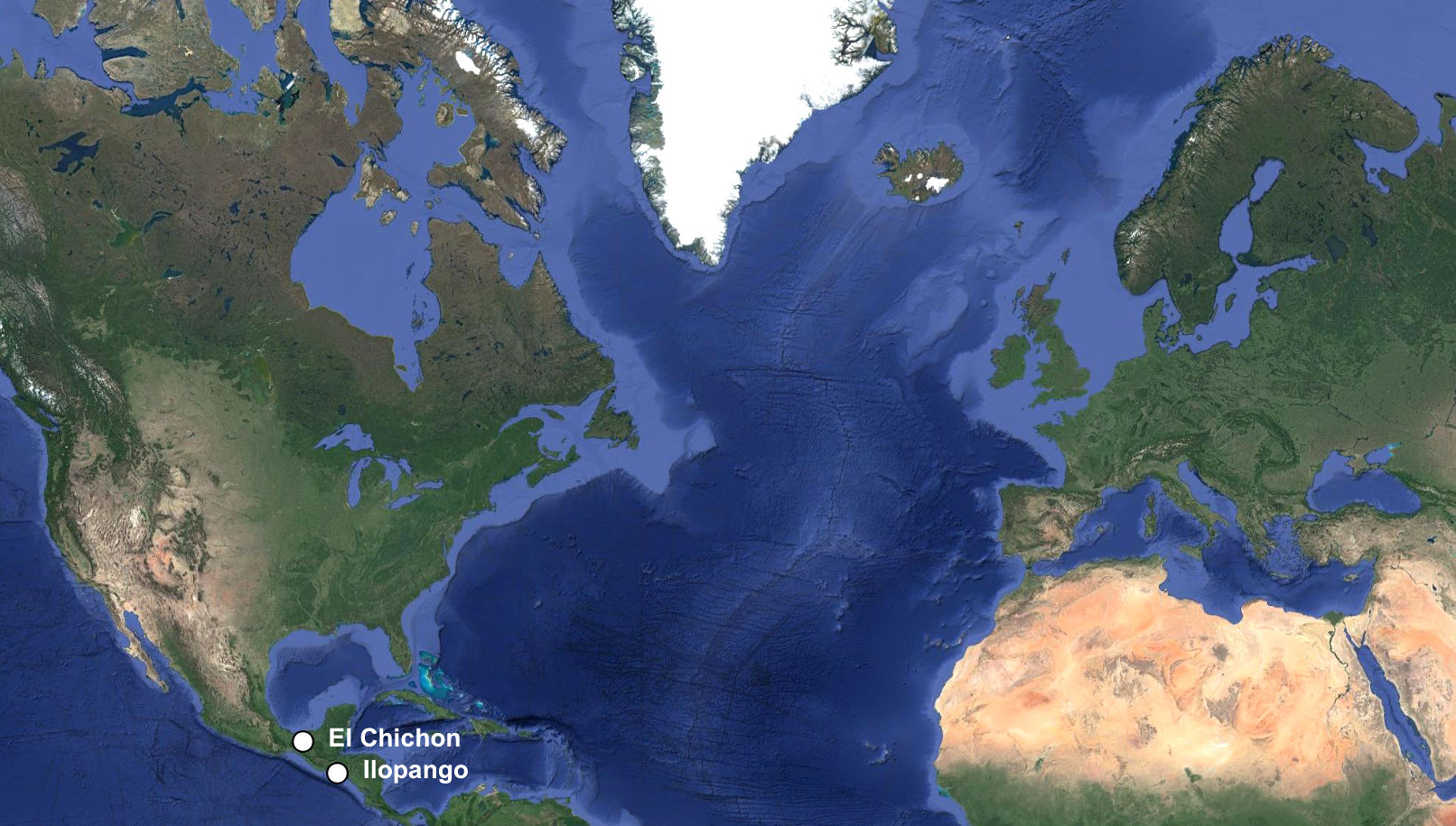 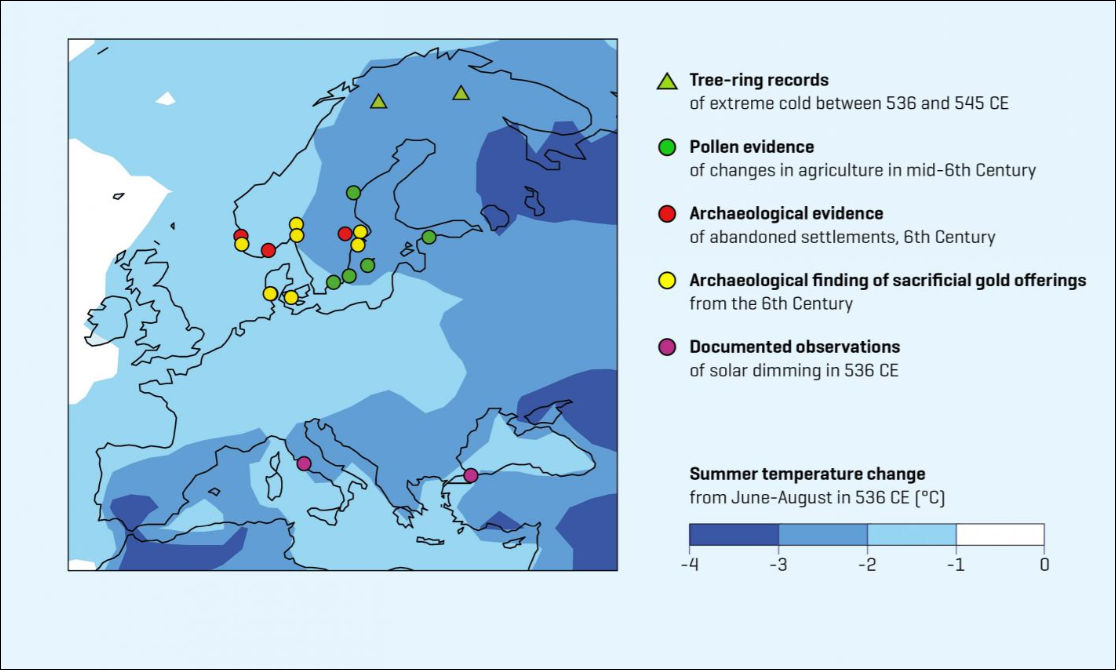 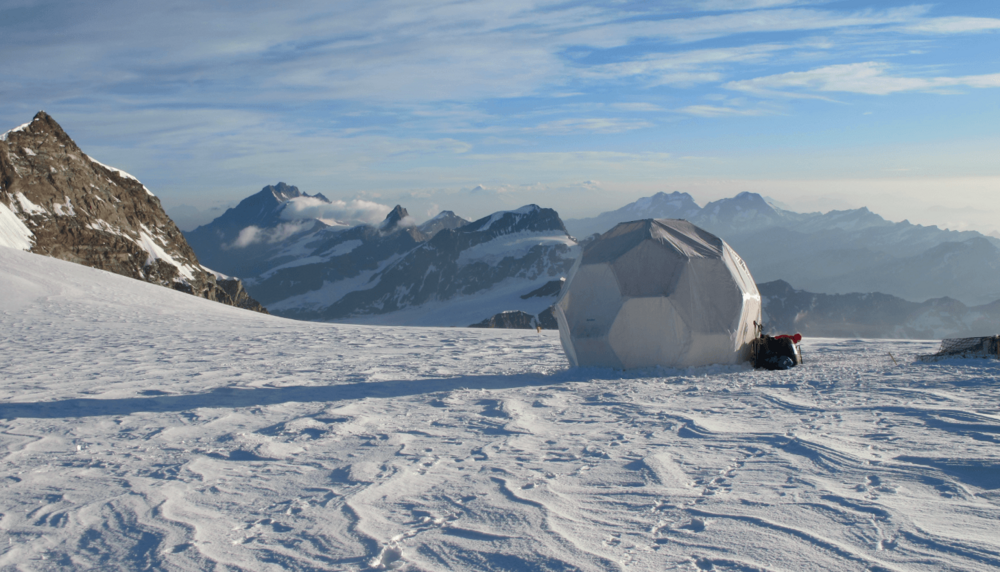 A 72-metre ice core drilled in the Colle Gnifetti Glacier in the Swiss Alps captured over 2000 years of fallout from volcanoes, storms, and human pollution.
Image: Frozen in Time 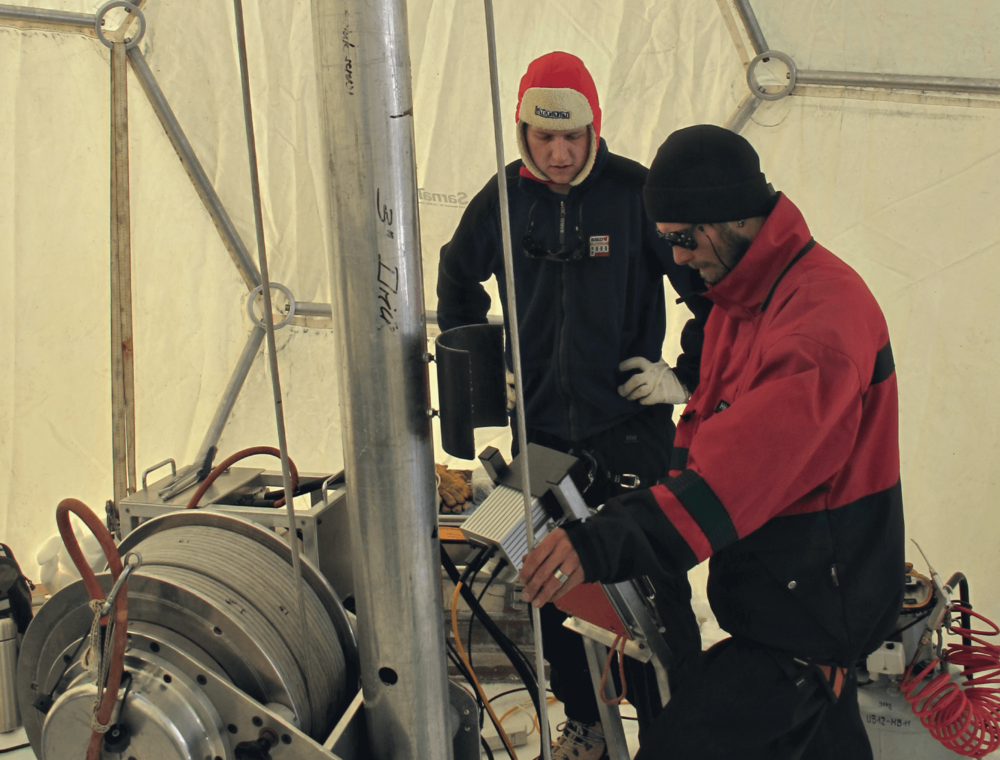 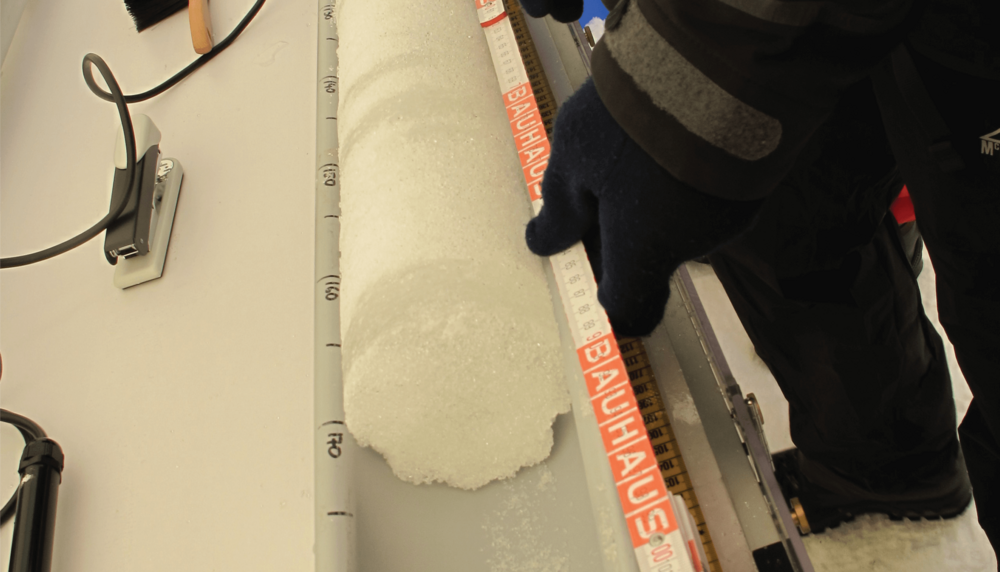 Part of the ice core.
Image: Frozen in Time