A Pre-Viking Farm at Ørland, Norway

These marks in the soil are part of a larger find that show there were three buildings here arranged in the shape of a U. The size of the buildings and associated finds show that the owners of the farmstead were relatively wealthy.
Photo: Åge Hojem, NTNU University Museum

Excavations taking place with the expansion of Norway’s Main Air Station at Ørland have revealed a pre-Viking Period farm.

It is sometimes claimed that the peninsula that is home to Ørland, Norway’s Main Air Station, looks like the head of a seahorse with its nose pointed south. In the pre-Viking Period, however, its shape was different.

The map to the right show the position of the excavation in yellow, and dry land as it was 1,500 years ago is shown in green. It can be seen that the farm was positioned on the edge of what was once a protected bay.

Ingrid Ystgaard, project manager at the Department of Archaeology and Cultural History at NTNU University Museum, says: “It was a sheltered area along the Norwegian coastal route from southern Norway to the northern coasts. And it was at the mouth of Trondheim Fjord, which was a vital link to Sweden and the inner regions of mid-Norway.”

The excavations so far have revealed that there were three buildings arranged in the shape of a U. The two longhouses that were parallel to each other measured 40 metres and 30 metres and were connected by a smaller building.

The 40-metre longhouse contained several fire pits, at least one of which was clearly used for cooking. Other fire pits may have provided light for handwork, or for keeping the longhouse warm.

Not far from here – but outside of the bounds of the present site – Ystgaard expects there are graves, too, and a harbour with boat houses. 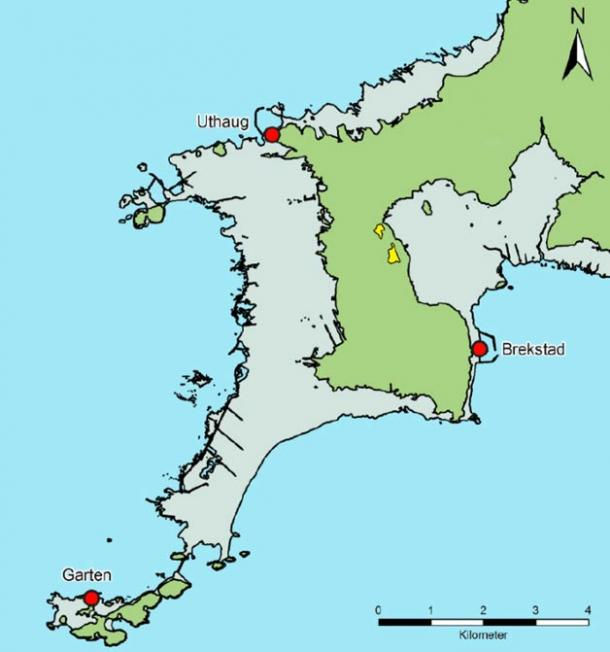 The peninsula at the mouth of Trondheim fjord that shows the location of the dig (in yellow) and the area that was dry land 1500 years ago (in green). The dig is located on the edge of what was once a protected bay.
Source: Ingrid Ystgaard

The Late Iron Age in Scandinavia The Origins of the Vikings The Danevirke The Kanhave Canal, Samsø Pre-Viking Farm at Ørland, Norway Uncovering an Iron-Age chieftain’s long-house