The Later Iron Age saw the construction of a large number of fortifications. Some 1,500 examples of these forts remain, but one of the best example is Eketorp, which was excavated during 1964 to 1973. The excavations indicated that there were three main phases to the fort:

The Migration Period also saw the appearance of rich burial mounds such as those at Vendel, Gamla Uppsala and Valsgärde.

Vendel is a parish in the Swedish province of Uppland overlooking a long inland stretch of water, Vendelsjön, near the confluence of the Vendel and Fyris rivers.

Fourteen graves at Vendal were discovered during a series of excavations during 1881 – 1883. Several of the burials had been placed in boats up to c. 9 metres long, and the burials were richly furnished with weapon assemblages, including swords, shields and helmets. They also contained objects such as cauldrons and their suspension chains, presumably indicating that the person in the grave had been of sufficiently high status to have presided over feasts.

The largest of the burial mounds at Vendel – known as Ottarshögen – is traditionally seen as the burial place of king Svea Ottar Vendelskråka who is mentioned in documents of the 8th century.

Gamla Uppsala is a parish and a village outside Uppsala in Sweden, and Valsgärde is a farm on the Fyris river, which lies about three kilometres to the north. From the 3rd AD onwards Gamla Uppsala was an important religious, economic and political centre, and early written sources show that Gamla Uppsala was known in Northern Europe as the residence of the Swedish kings of the legendary Yngling royal dynasty.

The oldest Scandinavian sources, such as Ynglingatal, the Westrogothic law and the Gutasaga refer the king of Sweden as the “King at Uppsala”.

The cemetery at Valsgärde was excavated during the 1920’s and produced similar finds to the graves at Vendal.

In addition, finds from high status settlement sites such as Dankirke, Gudme, Helgö and Lejre indicate trading contacts outside of Scandinavia.

The development of Eketorp Fort 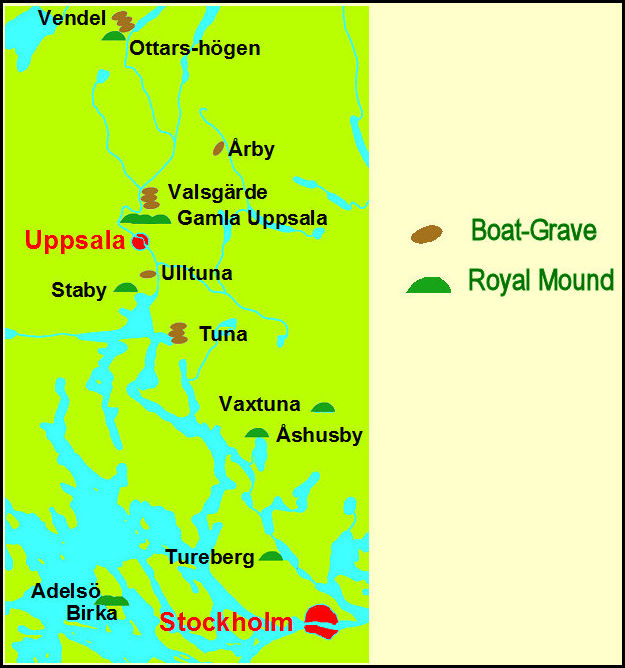